I like the Botanist a lot too.  Haven't see the other two

We don't drink much Gin in our house, but Botanist is the house label here.

After watching the Packers last night, everything I could get my hands on.

I like the Botanist a lot too.  Haven't see the other two

Dingle is a small production gin from Ireland.  I can get it now here in Ithaca after asking repeatedly.  Like The Botanist, the botanicals are all native to Ireland.  Nolet's is Dutch.  It has a slight hint of rose to it which is a LOT nicer than it sounds!  It was an "oh wow" gin for me when I first had it 2 or 3 yrs ago.

Has anyone had the Kirkland anejo tequila? The value on this is ridiculous. I won’t claim to be an expert on tequila, but I’ve been a fan of Fortaleza anejo, Don Abraham extra anejo, and definitely a fan of Don Julio 1942...but for 20$ for a 1L bottle, the Kirkland is impossible to beat for value. It’s delicious. A stand alone sipper. No ice, no lime. Just straight up. Not quite at the same level as those mentioned, but at 70$+ cheaper, I’m okay with that.

We finally got a bottle of this. It really is quite nice, and at the price it’s a stupid crazy value.

Nice - I assume you had a good time

So do you think the Van Winkle's are much better than other bourbons?

I had heard that years ago, Buffalo Trace had a hard time selling the Van Winkles but then people discovered them and they shot up in popularity and now they are a prized possession.

I’ve tried several, including the 23. IMO they are awesome but I would never pay the crazy secondary pricing.

Nice - I assume you had a good time

Had an outstanding time.  1950 Old Fitz S-W aroma is absolutely enchanting, and on the palate is an amazing experience.  TPE has consumed some really unicorn bourbons and ryes in his time, and this definitely impressed him. 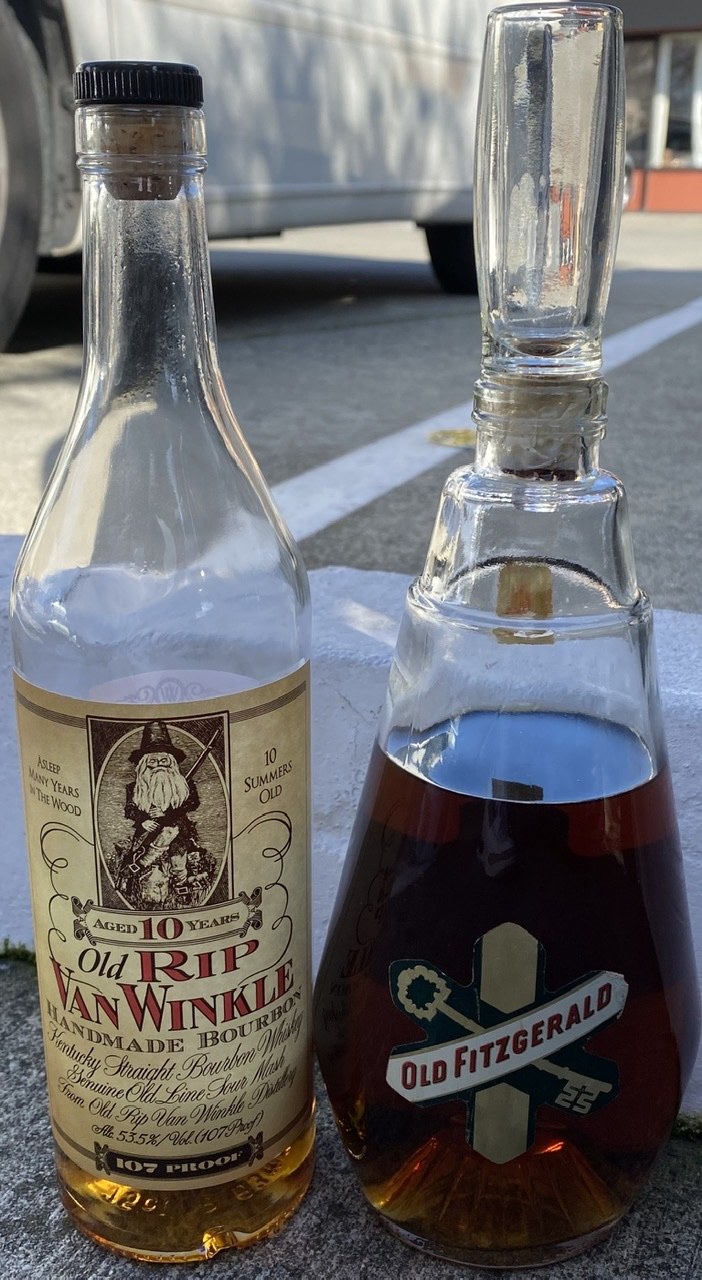 So do you think the Van Winkle's are much better than other bourbons?

I had heard that years ago, Buffalo Trace had a hard time selling the Van Winkles but then people discovered them and they shot up in popularity and now they are a prized possession.

They’re better, but not commensurate with the multiples higher in price they are on the secondary market.

Bear in mind that bourbon having any sort of “premium tier” is a fairly recent phenomenon.  Go back to the 80s and prior, and you’d find the top shelf of bourbons didn’t cost significantly more than the bottom shelf.
2/3/207:36 PM
❤️ 0

This is a craft distillery in KY that opened in 2014. I'd heard great things about it and finally grabbed one (only $50). It's high proof (about 113) and high rye (30%), so right up my alley. If you appreciate that style, get this while you still can. Was really impressed with it, and has a very rich flavor profile. Unbelievable at the price and only 4 yrs old. Tried the rye also, and had great mouthfeel, but a bit flat and bland for a rye.

Couple of nice ones there Prosys.

The ‘19 OFBB isn’t as good as previous years IMO.  But the local honey hole I go to with some clients has it priced not much more than the Eagle Rare or Knob Creek tier, so I’m still content to consume it

The ETL100 was really good, and I could understand why folks have been chasing that one hard.  A bit more expensive than the OFBB, but still less expensive than what a typical place charges for something “premium” like a Macallan 18.

I was invited to the 10th Anniversary party for Woodinville Whiskey Co. last weekend. I've been a big supporter since they started.

They had 2 new bottlings.  If I remember right, one was a 3-barrel whiskey, started in American white oak, then transferred to a used bourbon barrel for a few months, and finally finished in a used scotch barrel. It definitely picked up the peatiness from the scotch barrel, and tasted like a very good, blended scotch. The second, was their first Barreled in Bond bourbon. Great nose of sweet wood and butterscotch on this one, and a super smooth finish for 100 proof. For an extra few bucks, they laser-etched the label on the front, and added the names of myself and the two friends that accompanied me. This will be a special bottle to pull out when we get back together.

And how do you feel this fine morning?