The US dollar is the global reserve currency and the US has the largest economy in the world.

Trump's tweeting and general buffoonery is changing neither of those things.  The US is not in danger, nor will it suffer mightily, even if (when) Trump is reelected.  The respect of its allies, whatever the hell that means, is unimportant and irrelevant because of the US' economic importance.

"general buffoonery" isn't that cute? He just kids when he mocks the disabled, insults war heroes while pardoning war criminals, calls neo-Nazis "fine people", tries to blackmail foreign governments in dirtying up political opponents, entourages his band of yay-hoo followers to violate the Coronavirus recommendations from his OWN administration, muses about injecting household cleaners, and, and, and...But he's just some lovable, misunderstood, funny man. Ha ha.

csm, thinks this is actually the president. 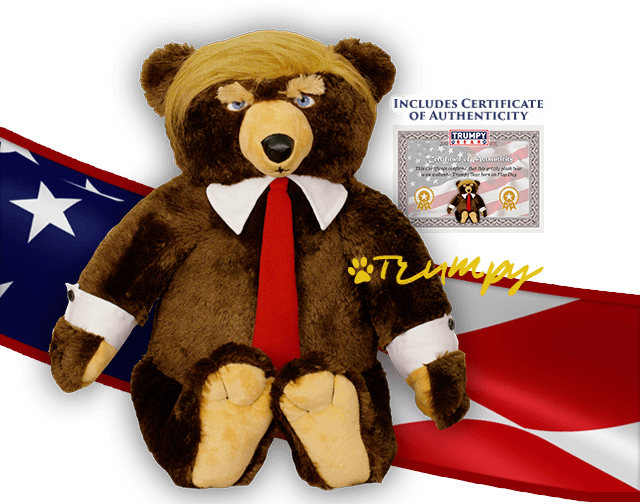 All soft and comfy and just rolling in hilarity and buffoonery. To our asshole troll, get them while they're hot, you can hung him all day. I think I can write the ad copy.

"When I hug Trumpy Bear he makes me feel safe from all those black and brown people who think they're my equal. I give him a squeeze and think of how good he makes me feel knowing he'll also protect me from Asians, Muslims and anyone else who isn't like me. And I know Trumpy Bear will protect me most from uppity "nasty" women who should be home, cooking dinner like the housewives of the past. And when they're not doing housework you make me feel it's OK to grab anyone of them I like by the pussy. Trumpy Bear, I just love you and so does Kim Jong-il."